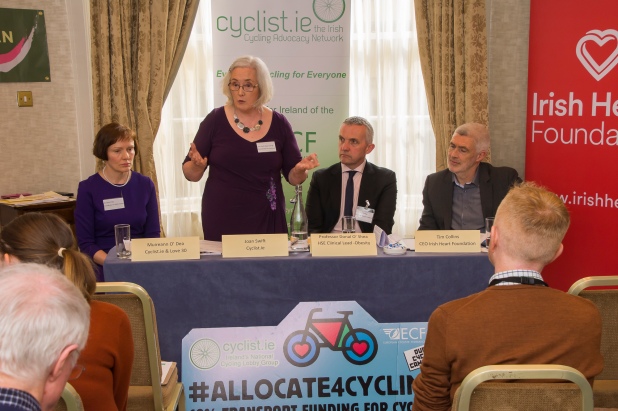 On 17th April, Maynooth Cycling Campaign through its membership of Cyclist.ie, the Irish Cycling Advocacy Network, and in collaboration with the Irish Heart Foundation, the Irish Cancer Society, Diabetes Ireland, Irish Doctors for the Environment, the Association for Health Promotion Ireland and the Irish Pedestrian Network, presented an open letter to An Taoiseach and Ministers calling on the Government to ensure that active travel will form an integral part of the All-of-Government Climate Plan.

The National Physical Activity Plan Get Ireland Active recognises the benefits of the natural and built environment in promoting active travel and lists actions which would enable increased physical activity. These include walking and cycling strategies and the planning, development and design of towns and cities. Despite the clear awareness of the link between physical activity and the built environment, Active Travel is not being prioritised. As an example, the present level of transport funding allocated to cycling is less than 2%.  This needs to increase to meet the United Nations Environment Programme recommended levels of at least 10%, and with at least 20% recommended for cycling and walking.

It is widely acknowledged that the government is not meeting its climate targets.  Transport emissions in particular continue to rise. Insufficient thought has been given to the extent to which the take-up of active travel can contribute to emissions reduction. Furthermore the Transition Statement 2018, which sets out a path towards a carbon free future, contains no targets acknowledging that walking and cycling are valid means of transport related climate action.

Healthy Ireland surveys confirm that the average Irish adult is not meeting the target of a minimum of 150 minutes of physical activity per week and concerns about the results of inactivity on the health of  Irish children are growing.

Colm Ryder, Chair of Cyclist.ie, said  “When exercise is seen as an ‘extra’ that has to be fitted into busy lives on top of work, commuting, caring and other family responsibilities, it is easy to neglect. On the other hand,  walking or cycling to work, school, college, shopping or to social activities offers people the opportunity to integrate physical activity into their day-to-day lives”.

Although an Taoiseach and Ministers were asked to send a representative if unable to attend in person, none  did so. An Taoiseach and the Minister for Transport did replied to Cyclist.ie – the other three Ministers did not.

The publication of the All-of-Government Climate Plan which is due shortly after Easter will  reveal just how serious the government is.