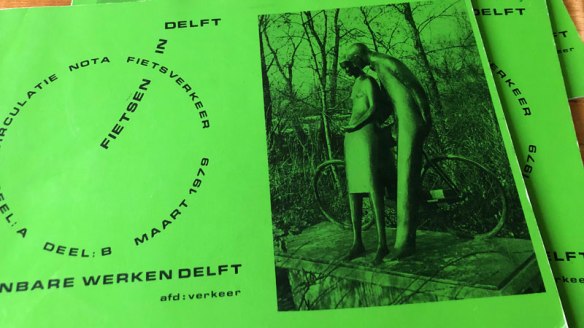 Delft was the third city in The Netherlands to experiment with modern cycling infrastructure, aided by the national government. After the experiments in Tilburg and The Hague in the 1970s, where they built one very good (but also very expensive) cycle route, that had mixed results but didn’t lead to more cycling overall, Delft took a different and innovative approach. Delft wanted to improve the city’s existing cycle network, which had a lot of missing links. The reason for this area-wide experiment was the increasing modal share of private motor traffic. The city clogged up and couldn’t cope with all those cars, it certainly wouldn’t be able to accommodate even more cars in the future. Cycle expert André Pettinga, who worked for the city of Delft at the time, summarises the need for the Delft Cycle Plan in just a few words: “The local government wished to increase the modal share of cycling!”. This cycle plan was a direct answer to the mainly car-driven Traffic Circulation Plans that had been made for many cities in the Netherlands, including Delft, in the 1960s. The execution of those plans was stopped oneafter the other, because of opposition of the public and changed ideas regarding urban planning……………….