The journey commenced at Mullingar Railway Station. It is located in the centre of the town, has car parking, toilets and across the road there are signs which indicates what direction to follow. The signs however were filthy – they was a heavy covering of moss which indicates that proper maintenance procedures have still to be put in place. Almost immediately, there was a second sign on the towpath telling cyclists to dismount. Not a good start!

The first section is within the town and follows the Royal Canal. Although the towpath is intended for use by both pedestrians and cyclists, it is very narrow. In some places, space is constrained with no scope to widen it. In other places though, there is space to widen the path to at least minimum standards. On the plus side, it has a tarmac surface.

After a kilometer or so from the station, the path splits. The right leg continues along the Royal Canal towards Longford while the left leg marks the start of the Old Rail Trail proper. The Old Rail Trail as the name implies follows the line of a disused railway from Mullingar to Athlone. It forms part of the Dublin Galway Greenway and is also part of EuroVelo 2 and the National Cycle Network. It was opened by the Taoiseach Enda Kenny last October so it will be six months or so before we get an indication of its popularity but the feeling so far is that it will be very popular.

On the day in question we did not pass a lot of users although there had been more in the morning but the day was chilly and I have no doubt that there will be many more when the weather improves. The other feature of the users is that there were more cyclists than walkers. This is hardly surprising as it is a characteristic of many greenways although from from the lack of consideration of cyclists’ needs, you would think that the reverse was true.

The path is 3m wide with a smooth, machine laid, tarmac surface. The original rails for the railway run alongside for most of the way. The trail is made up of fairly long straights which is somewhat boring but some sections are in a cutting which limits the views although providing some shelter while other parts are on an embankment which allow cyclists to view the pretty Westmeath countryside but are more exposed.

While there are a number of distance signposts, it would be nice if there were a few more along the route. This is not a serious problem as a smart phone or bike computer will keep track of progress. There was only one major intermediate stopping point at Castletown Geoghegan. However although the village was marked by a pretty signal box and railway station, the village itself was three kilometers away so I doubt that many cyclists and even less walkers will divert  there. 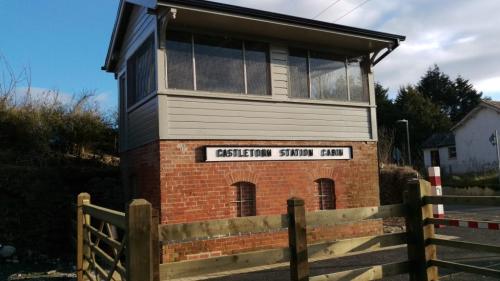 When we reached Moate, we were ready for some food so fortunately there was a good selection in the town. A number of premises have placed advertisement signs at the end of the greenway. We selected one premises and had a hot snack which was very welcome before setting off on the return journey.

The second issue was the form of barriers which took the form of a chicane. While this barrier  is wider that the barriers which Waterways Ireland generally install along canals, the opening of 1.2m is not as wide as best international practice width of 1.5m.

The third criticism is that while the greenway was 3m wide, there had been scope to provide 3.25 or 3.5m which would have made a first class greenway rather than a good one.

There is brochure on the Trail which is downloadable from the internet or which is available from premises along the route. The brochure refers to Mullingar being a “cycling hub”, presumably on the basis of the rural greenways. Whatever about these, Mullingar is a typically Irish county town. What cycle lanes it has are few in number and are low quality. They are generally outside the town centre and Westmeath County Council appears to have forgotten that cyclists need to have facilities in two directions as some uni-directional cycle lanes are on one side only. There was also not much sign of a “fine mesh” grid of cyclists so it was hardly surprising that there were few cyclists about.

When the Old Rail Trail was opened, Westmeath County Council was reported as having written to all the neighbouring cycling clubs informing them that the greenway was intended for leisure cycling and for families rather than racing clubs. It is somewhat bizarre that Westmeath County Council built a good quality facility that was designed as part of a national network for cycling but discouraged an important segment of Irish cyclists from using it.

Despite this, all in all it was a pleasant outing and one recommended.